I bought a book from Laurel Hill Cemetery gift shop (yes they have a gift shop) about the symbolism and iconography used on gravestones, in this book they discussed ways that people tried to prevent body snatching they elaborated. “from mausoleums to “mort lairs or cages” (a devices that looked like a jail) to the “Torpedo Coffin” (which exploded if tampered with).” Then the book moved onto discussing floral patterns on headstones and their meanings… 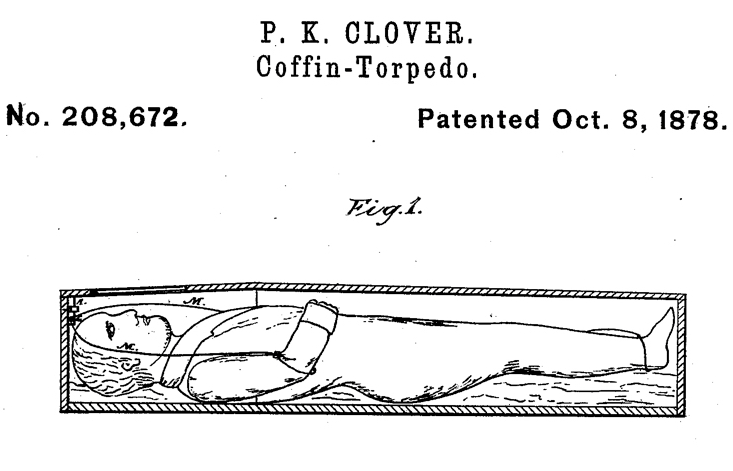 Excuse me what? Why do you think something like an EXPLODING TORPEDO COFFIN is only worth a brief mention? What is this strange and wonderful would be grave robber annihilating device! I want to know everything! So I started researching.

There are several good articles about the Torpedo Coffin that if you should absolutely read, but in short there were two patented designs one that fired a round of basicly buck shot if you tampered with the body, and a second design that was built to blow up like a fucking landmine! There is at least one reported case of a coffin exploding and killing one man, and wounding another. There is debate on if this was one of the patented Torpedo Coffins or simply a boobytrapped coffin, I am not sure how much of a difference it would make. Would the graverobber be offended that he was knocked off by a knock off?

Regardless, I am enchanted by this concept of not wanting anyone to steal the body of your loved one and thereby preventing them from participating in the rapture, so in a very victorian christian manner along with their treasured possessions one should tuck a little landmine in the coffin with them.

I do feel sorry for later archeologists thinking they found a body from one of the ancient people of Ohio and ending up with a face full of lead.